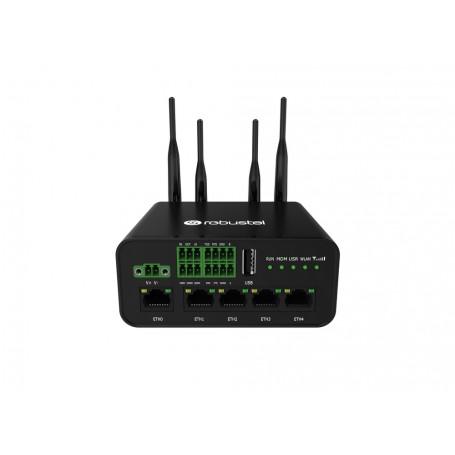 The R1520 router from Robustel is a versatile 4G router with 5 x Ethernet ports, GPS and E-mark certification for in-vehicle use.

Other hardware features include optically isolated digital inputs and outputs as well as a 10-bit analogue input capable of interfacing directly with sensors in the range of 0 to 24Vdc or 0 to 20mA.

R1520 also has a 2-wire RS485 interface for connection to legacy instruments with full support for Modbus. The RS232 port features RTS/CTS lines so the product can accommodate applications that require hardware handshaking.

Despite being cost-effective, the R1520 is a powerful router with high packet-forwarding capability – way beyond the typical requirements of LTE CAT4 networks. The Linux based Operating System, RobustOS, has been developed entirely in-house which leads to a very high standard of technical support and infrequent firmware updates due to modular nature of the OS. Many unique software innovations are built on top of RobustOS, these include:

Sniffer – run a Wireshark trace directly on the router for invaluable diagnostic information. Customers can also easily write their own applications using the extensive SDK supplied free of charge.

RCMS is Robustel’s free router monitoring service that is fully compatible with the R1520. It allows customers to see a location overview of their routers quickly and simply on a map.Features such as data usage, signal strength, current network and much more can then be viewed on a per router. Over-the-air updates are supported for Firmware, router configuration and Apps serving as essential ‘insurance’ if anything was not quite right during deployment.

What's in the box:

No customer reviews for the moment.

19 other products in the same category